Blog - Latest News
You are here: Home1 / News2 / The Modern Food System – Ready for the Next Revolution 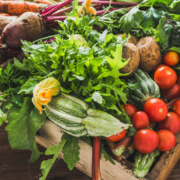 Food systems have undergone multiple revolutions since the dawn of agriculture 12 thousand years ago. Each revolution has preceded the great societal advances that have brought us to the sophisticated modernity we know today. However, the modern food system is now increasingly a victim of its own success, and as it falters, the ambitions we have for a truly sustainable future, falter with it. The transformation of the food system into one that provides enough healthy food to everyone in a way that conserves or even regenerates the ecosystems upon which it depends, is essential. This is underscored by three key challenges:

A changing climate and an ecological crisis: The modern food system is both inherently vulnerable to, and a significant driver of, climate change and biodiversity loss. Desertification, flooding, droughts, alongside loss of habitats and pollinators, are burdening land and water resources, reducing yields and undermining food security. For example, the sequence of droughts and cyclonic flooding that have hit many southern African countries over the last three years have devastated rain-fed crop production – putting food security for 30 million people in the region at risk. Industrial models of farming are not helping – they lack the resilience to cope with climatic changes. A vicious cycle – of greater intensification to offset reducing yields, resulting in further reduction in productive capacity – threatens to accelerate.

Fossil Fuels dependence: The extensive reliance on fossil fuel-derived energy and inputs across the entire food system not only accounts for its unacceptably high “ecological footprint” but also the tight coupling between the oil price and food prices. The 2007/8 global food crisis, which sparked food riots on every continent after wheat and rice prices nearly doubled, was primarily driven by the spike in the oil price.

A highly connected and complex system: The food system is showing itself to be inherently vulnerable to a diverse array of systemic shocks. The current Russia Ukraine war demonstrates this: The conflict has not only driven up oil prices, but as major players in fertilizers, wheat and sunflower markets, food prices globally have risen to all-time highs.

Connected, global, complex and predisposed to being afflicted by “perfect storms” – these are the earmarks of a profoundly fragile system and not the secure and resilient foundation upon which a sustainable future for mankind can be built.

But there is hope. Important changes taking place that are cause for optimism.

Changing policy and regulatory contexts: The Paris Agreement’s goal to achieve carbon neutrality by mid-century has brought the food system into the centre of climate action and has catalysed debate. The flaws of the current system are being acknowledged and a new language  of transformation has emerged that includes “net zero”, “sustainable diets”, “diversity”, “resilience”, “carbon sequestration”, “nature-based solutions”, “climate-smart farming” and “sustainable landscapes”, amongst others. Fundamental policy shifts have followed, most notably the EU Green Deal that has sustainable food systems at its heart and global leaders have committed to nature positive by 2030 The rules of the game are changing, creating the space and context for a transformed food system to emerge.

A groundswell towards regenerative farming: The last few years has witnessed an unprecedented acceleration in interest in ecologically-centred farming concepts falling broadly under the banner of regenerative agriculture. They are bound by the desire to move primary food production from being in conflict, to being in harmony, with the natural world.  Healthy soils are acknowledged as the foundation for sustainable food production – producing more nutrient dense food while potentially serving as massive carbon sinks. Regenerative agriculture is the centerpiece of an envisioned sustainable food system and, importantly, its mainstreaming is increasingly being driven by major corporations.

A consumer awakening: The consumer landscape is also changing rapidly as individuals are increasingly influenced by environmental considerations and the realisation that their food purchasing choices are one of the most meaningful ways they can contribute to addressing climate change, biodiversity loss and ecosystem collapse. On average, one third of consumers are willing to pay more for sustainable products. There is also increasing attention on reducing food waste.

Localised food networks: Consumers’ interest in where their food comes from, how it was produced, its environmental and social “credentials”, and how it impacts their health, continues to grow. Consumers are reconnecting directly with their food sources – creating alternative food networks that are challenging incumbents. Local food systems do more than feed local communities, they re-establish accountability and transparency, empower local people, reduce external farming inputs and transport emissions, provide greater food security and improve the resilience of rural economies.

As much as the food system is revealing its vulnerabilities and frailties, so too is it demonstrating, in multiple ways, the possibilities of what it can become. Change is happening. As it gains momentum and spreads, it has the potential to coalesce into the next food system revolution, one that will transform it into the resilient and abundant foundation upon which a sustainable future can be built for all.

To find out more about the Sustainable Food: Production and Processing online course which helps individuals working at every stage of global or local food systems, CLICK HERE.

Want to join the discussion?
Feel free to contribute!

My Tweets
Blueberry producers can sustainably reduce their carbon emissions in a way that...

Tracking Your Sustainability Progress with SHERPA
Scroll to top