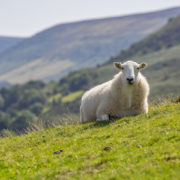 The past ten years have seen veganism go from an unknown concept to a prevalent household term. In the UK alone, the number of “vegans” has increased four-fold from 2014 to 2020.1 The environmentally-detrimental effects of certain agricultural activities have resulted in the conscious cultural movement towards “plant-based” diets, based on the belief that production of animals and animal products deteriorates both human and environmental health. On the other hand, the rise in regenerative agriculture has revealed that an holistic and balanced approach to agriculture – an approach that requires the use of animals – yields the healthiest food systems, and thus the best results for the environment. This article addresses the idea that the foundations of regenerative agriculture could (and should?) inform our diets.

Veganism: what it is, it’s rise and reasons

Veganism can be quite an emotionally-driven shift. For many people, the idea of animal cruelty, mass-production and mass-slaughter of animals are key factors behind their decision to become vegan; the environmental argument tends to follow. Animal agriculture uses a significant amount of land and water and is responsible for massive amounts of pollution in the form of carbon monoxide, methane, dust and biologically active organisms.2 Livestock production accounts for 14,5% of manmade greenhouse gas (GHG) emissions, the majority of which comprises feed production and processing.3 The vegan diet, which excludes animal products and byproducts, has arisen in response to these statistics. By avoiding meat and shifting consumer demand away from animal agriculture, individuals aspire to reduce their ecological footprints.

Evidently, there is merit in the vegan diet because a shift away from animal agriculture would lead to fewer demands on finite natural resources and reduce GHG emissions. However, veganism may be missing the important fact that while animal agriculture is problematic, the entire system of agriculture is problematic. Indeed, over a quarter of all greenhouse gas emissions are caused by the current food system as a whole4, which is indicative of inherent weaknesses in current agricultural practices. Second, an extension of the vegan ethos requires consideration of the strength of an agricultural system without the use of animals. Regenerative agriculture, as will be discussed, provides insights into both of these points.

Regenerative agriculture is an alternative school of thought to conventional agriculture, based on the understanding that healthy soil is the vital foundation on which all other systems are built. Consequently, farming practices are centered around strengthening soil and creating a healthy, balanced ecosystem, which in turn has many positive externalities in relation to pest management, fertilizer saving and water saving, among other benefits5. Optimal healthy soil is one of the most important carbon sinks available to us. The outcomes of the soil’s ability to capture and store carbon is vital both in tackling climate change and environmental degradation, as well as in yielding crops with a higher nutritional content.6 In contrast to conventional agriculture’s degrading effect on the environment, regenerative agriculture is an entirely separate system which works to strengthen the environment.

One of the most important revelations of this systematic shift to regenerative agriculture – and for the purpose of the current discussion – was the realization that livestock is fundamental to the restoration of degraded land.7 The land itself evolved and has come to depend on the behaviour and patterns of large herds of grazers. An holistic approach is essential; managing livestock in adherence to evolutionary patterns is a necessary component of a healthy ecosystem. As Allan Savory wrote, “Individual parts do not exist in nature, only wholes, and these form and shape each other” such that, when removing animals from the agricultural equation, we break the entire system. Thus, veganism – to the extent that animals are removed from agriculture – clearly is not the best solution for the environment.

What does this mean?

These insights draw to the conclusion that what is needed is a significant systematic change, specifically one that does not exclude animals, but rather uses them in alignment with evolutionary principles. While veganism is well-intended, it is likely that the emotional aspect of cruelty to animals clouds the necessary holistic perspective in which animals have a vital role to play in agricultural ecosystems. The regenerative shift moves animals away from feedlots, mass production and mass slaughter to using animals to restore land and strengthen the system. Should this new balance of animal and plant-based agriculture tell us something about the balance of what we should be eating? It is evident that current levels of meat consumption are excessive, and while this article by no means addresses the nutritional strengths of different diets, there may be something to be said about the environmental strengths of different diets. Regenerative agriculture is perhaps the guidance that we need to set the structure for a more balanced and environmentally-conscious diet.

COVID-19: A lesson in resilience. What the current pandemic is teaching us about...
Scroll to top