Blog - Latest News
You are here: Home1 / News2 / COVID-19: A lesson in resilience. What the current pandemic is teaching... 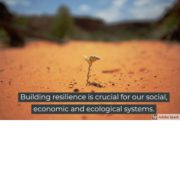 With the influx of the coronavirus, we have experienced the depression of much economic activity both within and between countries. The extent of the knock-on effects is yet to be realised, but some estimate that South Africa will face a loss of 1 million jobs . South Africa faces a number of internal and external vulnerabilities, all of which are exposed by the current crisis. What is evident is the very fine line on which our world has been balancing; we have been teetering on the narrow capacities of our socio-economic and ecological systems.

How does this relate to resilience?

Resilience is “the ability of a system, community or society exposed to hazards to resist, absorb, accommodate, adapt to, transform and recover from the effects of a hazard in a timely and efficient manner…”. The more resilient a system, the less it relies on external inputs, the more self-sufficient it is and the stronger its long-term wealth-generating capacity.

As borders close, what hits home is how the web of globalisation has deepened the dependencies of our economies on import/ export relationships. Shocks in developed countries are felt in emerging markets like South Africa. As supply chains slow, businesses face cash flow problems, which have domino-effects on many suppliers and consumers. More people move into poverty and the government, in an effort to prop up the economy, gets into greater levels of debt. Health care systems are placed under severe pressure, worsening the human impact of the virus outbreak.

While this is a very high-level view of what is happening around us, it touches the tip of the iceberg in terms of the intricacies, interconnections and dependencies of the systems in which we live. The snowball effect of the coronavirus indicates a severe lack of built-in buffers within the system and thus an inherent lack of resilience.

This tale of resilience serves as a forewarning…

Another virus is but one of many unexpected shocks that the world could face in the decades to come. In fact, as suggested, we can expect another virus outbreak if we continue to destroy biodiversity and nature. Even more severe are the consequences of global warming and a growing population on our food supply if real change fails to be enacted. We cannot keep living in this proverbial bubble.

Nature has an inherent resilience that breaks down when biodiversity and soil health are destroyed, and when environmental sinks are overloaded. Healthy soils and reforestation are two forms of natural buffer that are crucial in the fight against global warming given their ability to absorb and sequester carbon from the atmosphere. Yet many of the key stewards of soil health – farmers – are inadvertently breaking down soil health because of the conventional agricultural practices they adopt.

Shocks faced in the environmental system cannot be isolated. This system is the foundation of our social and economic systems and plays an integral role in providing the space, resources, food, energy and very air on which we depend. Issues within the environmental realm will be felt increasingly so in all areas of life and will serve to deepen any other crises we are facing. It is time for us to consider the system as a whole and build in much-needed resilience.

What does this entail?

Building resilience requires a multi-pronged approach that understands the complexities of the system. More than that, it requires a rethink of the system as a whole. Currently, practices that build economic, social and ecological resilience tend to operate at the margin of the system. The rules need to be changed such that these are brought into mainstream thinking, strategy and action.

We need to rethink our ideas around profit and efficiency. To strengthen resilience through building buffer capacity, what is needed is a forgoing of efficiency in the short term. This opens up space for ‘extra’ capacity that, while seemingly redundant, will provide the much-needed buffer in the face of shocks. In a business, this may take the form of analysing their cash flow and ensuring that they have a sufficient savings account to act as a buffer in the event that the business has to shut down for a number of months.

Moreover, this rethink involves a level of humility: giving up our illusions that we can control everything. There needs to be space and opportunity for spontaneity within systems. In agricultural systems, this may take the form of a transition to regenerative agriculture, in which farmers introduce buffer capacity on their land by building soil health and increasing biodiversity. Instead of trying to micro-manage every aspect of the farm, this transition involves a trust in nature and in the roles played by different organisms and predators in the ecological process, as well as in the time that it takes for natural processes to unfold.

In addition to this, resilience relies on greater connectivity within the system. No system exists in isolation. When we are able to collectively learn and build community relationships that provide multiple feedback loops, then we are better positioned to anticipate and manage shocks. This needs to start on the local level, requires buy-in from the community and most likely necessitates a shift away from mass-production and export towards self-sufficient local markets.

As the world starts to recover from the shock waves caused by Covid-19, let us not forget the crucial lessons revealed by the virus. We must reflect honestly and deeply on the weaknesses of the current system and start to build in much-needed resilience into our ecological, economic and social systems. This is crucial in the face of new and potentially more severe shocks.

My Tweets
Do healthy food systems = healthy diets? What regenerative agriculture can teach...