Blog - Latest News
You are here: Home1 / News2 / A shift in the strategic landscape for agricultural export supply chai... 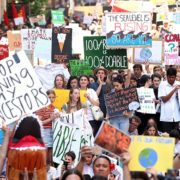 There have recently been a few events that are creating a major shift in the strategic landscape of agricultural export supply chains. They involve, amongst else, angry school children, political changes, a change in language and a few scientific reports.

Let’s start with the science. The United Nations (UN) recently released their fifth Global Assessment Report on Biodiversity and Ecosystem Services on 6 May 2019. The report has 145 authors from 50 countries who worked for three years to compile it. Representatives from 132 member nations signed off on the findings. In short, it’s credibility and authority are beyond question. The findings are dire and the language unusually stark for a United Nations report. Some of the main findings are as follows:

Other recent and credible papers and reports, such as the Worldwide Fund for Nature’s (WWF) Living Planet Report, paints the same stark picture.

So, we’ve covered the science side. Now who are the angry school children and where do they fit in? They are 12 to 16 year olds, represented by Greta Thunberg, a 16-year-old Swedish schoolgirl. Here is an abridged timeline:

That is exponential growth for you. The next event is planned for 20 September 2019 and there is a call for everyone to join the school children. Greta has presented at TEDx, addressed the COP24 summit, the World Economic Forum in Davos, European Economic & Social Committee and EU leaders at the EU parliament. She has been nominated for the Noble peace prize and chosen by Time magazine as one of the 100 most influential people of 2019. These “children” are passionate and determined and most of them will be able to vote in the next elections.

As a matter of fact, political change is already afoot. In Sunday’s (26 May 2019) EU Parliament elections, the “Greens” made large gains. They are now the second largest party in Germany with 20% of the vote. Young voters in particular abandoned the two main “conventional” political parties in droves.

Eight European countries (France, Belgium, Denmark, Luxemburg, Netherlands, Portugal, Spain, and Sweden) have called for an ambitious strategy to tackle climate change. Their proposal paper calls for the EU to have net-zero greenhouse gas emissions by 2050 and spending 25% of the EU budget on fighting climate change. Twenty. Five. Percent.

Another recent trend that will influence consumers’ and the electorates’ thinking around environmental risks is a change in the language used by the media in describing the environmental crisis facing us. The term “climate change” is increasingly replaced with “climate emergency”, “climate crisis” or “climate breakdown”. The loss of biodiversity and weakening of ecological systems is now referred to as an “ecological breakdown”. Social media has already grabbed onto these new hashtags. These changes are emphasizing the scale, extent and outright danger of the crisis looming for mankind.

The latest learnings from scientific studies, changes in the socio-political landscape and the choice of words used to describe this crisis is ramping up pressure on retailers to address climate and ecological risks in their supply chains. This pressure is set to grow at an accelerating rate.

Agriculture that is not seen to be embracing fundamental change towards ecological restoration and regeneration will experience strong push back from consumers, retailers and society in general. Expect more demands, more standards, more controls and other hurdles to accessing markets as retailers scramble to demonstrate that their supply-chains are not just minimizing negative impacts, but are delivering real and lasting solutions.

The take home message for growers, agri-businesses, supply chains and industries is to proactively develop, drive, communicate and OWN sustainability programs that deliver real and lasting ecological gains, or face the prospect of markets dictating the agenda with more top-down standards, programs and controls, or losing access to those markets to competitors who do move decisively in response to this crisis.

Carbon Emissions and Agriculture: How should we be thinking about the carbon...
Scroll to top