Blog - Latest News
You are here: Home / We Need to Take a Stand for the Environment – Here’s Why 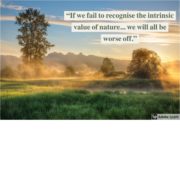 I recently watched an insightful, witty lecture by George Monbiot on ‘The Pricing of Everything’ in which he argued against the monetisation of nature (the process of valuing and attaching a price to components of the environment).

The essence of his argument is summed up as follows:

I believe this last point is one of the most important insights when thinking about issues of climate change, environmental degradation and natural resource depletion. It may seem like a radical view amidst the growth mindset of our economies and societies, but it is crucial and, as I will argue, incredibly logical.

So where’s the logic?

Aside from the beauty of nature – which has immeasurable intrinsic value – the environmental system forms the foundation of all other systems.

Nature provides the fundamental building blocks, in the form of energy and materials, that allow for the growth and development of man-made capital, economies and societies. On the other side of the equation, nature provides environmental sinks; removing carbon dioxide from the atmosphere and breaking down waste material.

The intrinsic value of nature is that we cannot exist without it. This view of the whole system with the environment as the foundation is known as strong sustainability.

When we deplete non-renewable resources, overload environmental sinks and destroy the foundations nature provides, we cut ourselves off from the ultimate source of our economic and societal wealth. This is the logic that opponents of environmental protection are missing; they are biting the very hand that feeds them.

If we fail to recognise this intrinsic value of nature and the foundational role it plays in our lives by pandering to those who care only about money, we will all be worse off. We need to take a stand for the environment and mobilise against anything (or anyone) that fails to recognise and appreciate nature as the ultimate foundation.